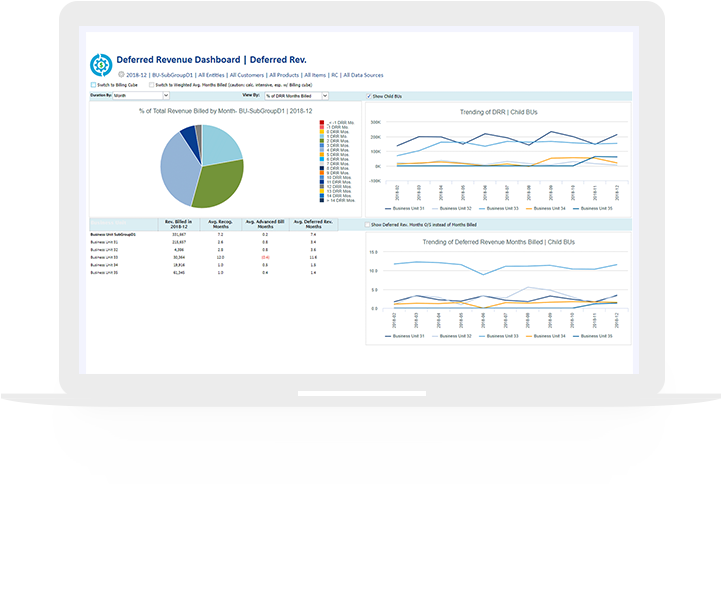 Recognize revenue more accurately and precisely than even leading ERP systems can with MRR Churn’s built-in revenue recognition engine that is fully compliant with modern GAAP and IFRS standards. You can choose to recognize revenue on a daily or monthly basis, with partial months at the start and/or end of recognition periods precisely recognized under both methods. The MRR impact from partial months (incl. different # days/mo.) is also precisely broken out in the churn analysis so that it doesn’t impact other components of net churn, e.g., by artificially and incorrectly indicating a price decrease impact on net churn for shorter or partial months.


Although revenue recognition is posted at a summary level per the reports below, it is actually calculated at the most granular level possible: the invoice line item level. So even if there are multiple line items of exactly the same product with different recognition periods on the same invoice, each will be recognized independently of all other line items. This allows for maximum recognition flexibility in your source data.

Moreover, unlike nearly all leading ERP systems, which can only recognize revenue in the local currency of the legal entity at the time of billing, MRR Churn recognizes revenue (and calculates all net churn analysis, except FX impacts) in the originating billing currency (OC), which is far more accurate. It then translates the OC values to both the local currency (LC) and the reporting currency (RC) of the legal entity, with all three currency types available for reporting at every possible summary and detailed level.

As an example to illustrate the potential magnitude of errors in ERP systems, let’s assume the LC/OC FX rate is 1.0 at the time of an annual subscription invoice for OC 120k and then rises to 1.50 by the end of the year. Leading ERP systems will recognize LC 10k/mo. for the whole year using the same 1.0 FX rate at the time of billing, whereas MRR Churn would recognize different LC amounts each month depending on the LC/OC FX rate each month. In the final month, MRR Churn would correctly recognize LC 15k/mo. based on OC 10K X 1.50 FX rate, whereas nearly every leading ERP system would incorrectly recognize only LC 10k, which is a very material difference.

Another major benefit of MRR Churn is the flexibility to change (i.e., correct) the start or end dates of recognition periods when they have been posted in error or they are simply missing (e.g., if a subscription invoice or credit memo was incorrectly posted to the standard billing system and not to the subscription billing module, which also captures the start and end dates of recognition). The recognition account, which drives BU revenue allocations, can also be edited in MRR Churn after posting without ever affecting the original source data. A full audit trail list of all such edits to recognition dates and recognition accounts is maintained by invoice and line item and is easily available via ad hoc reporting for review and audit purposes. 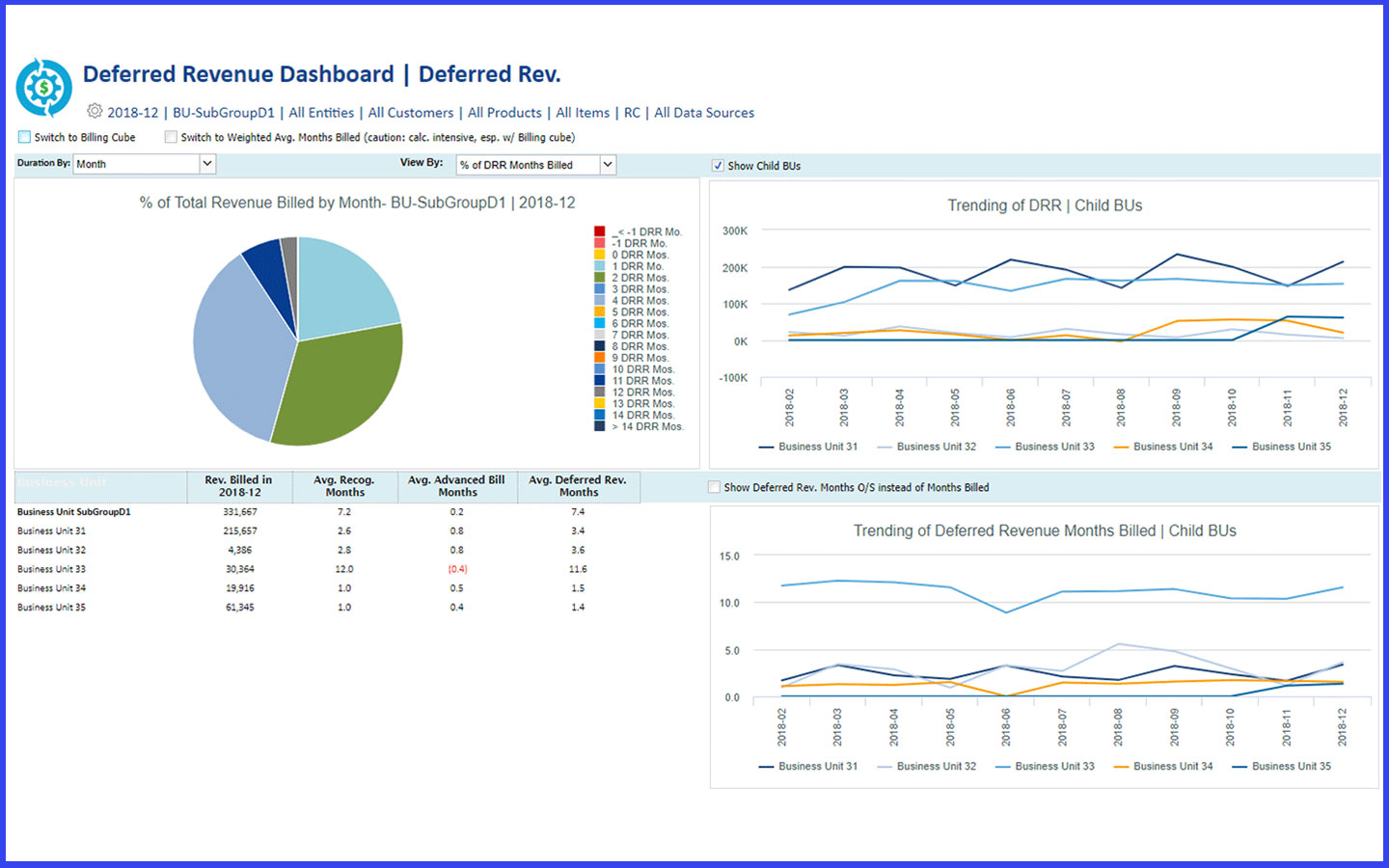 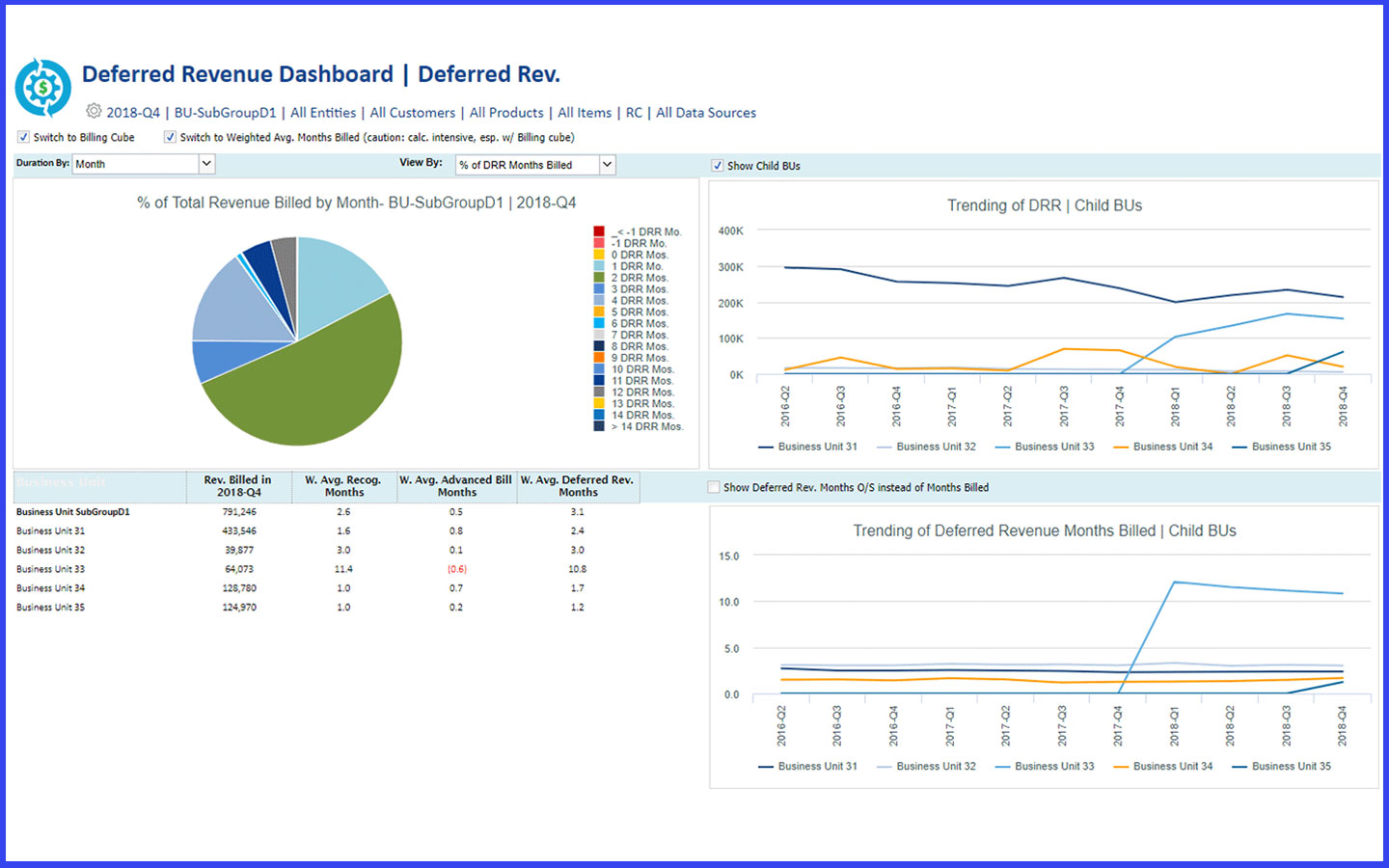 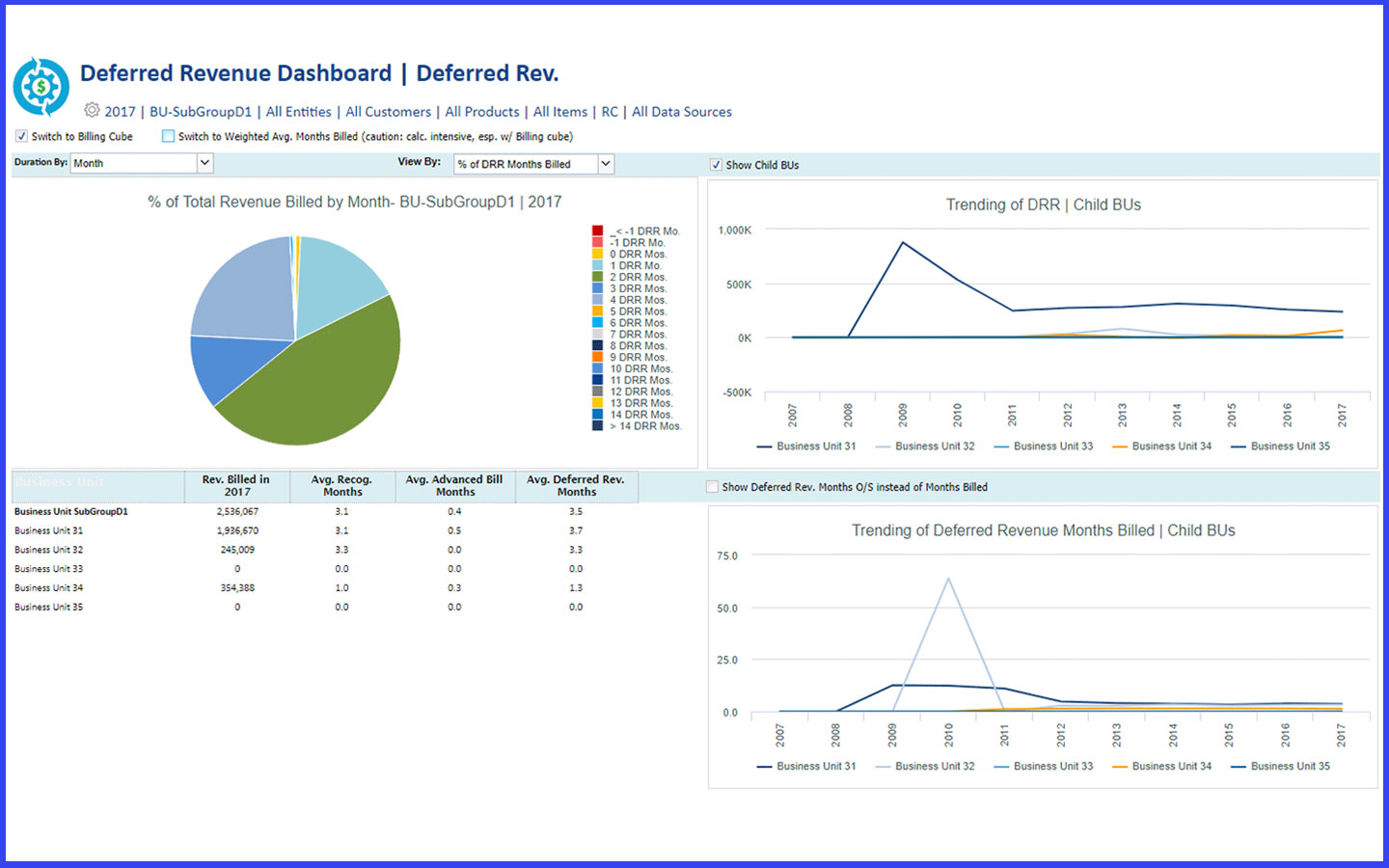 Compare graphs of recognition months billed or deferred revenue months billed across sister BUs within a chosen parent BU. These months billed comparisons can be done using a choice of four metric amounts: 1) by revenue billed, 2) by % of total revenue billed, 3) by customer count and 4) by % of total customer count. Easily identify which BUs and customer segments have the greatest opportunity to produce a permanent reduction in working capital by billing for more recognition months, on average, or by billing further in advance of the recognition start date. 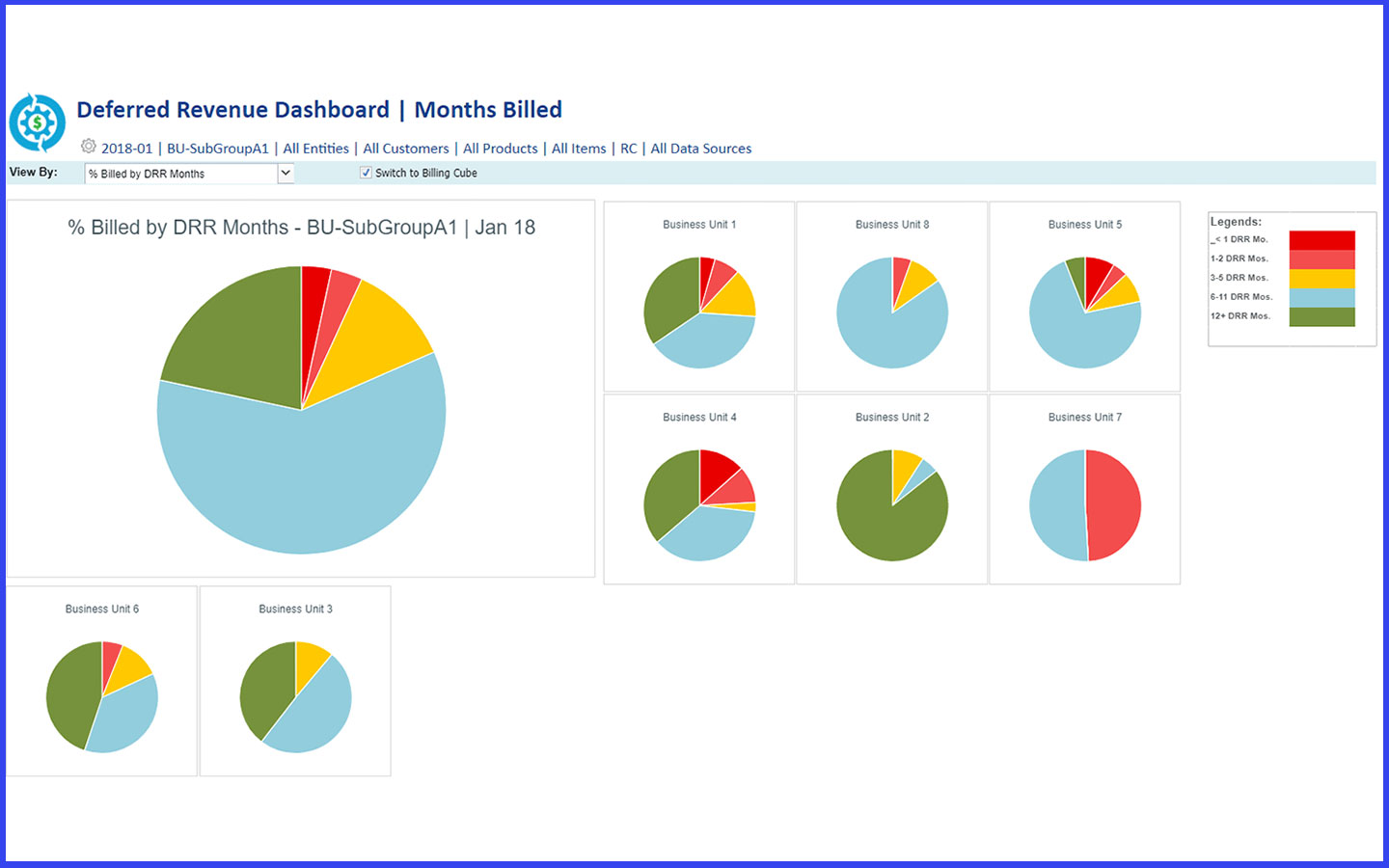 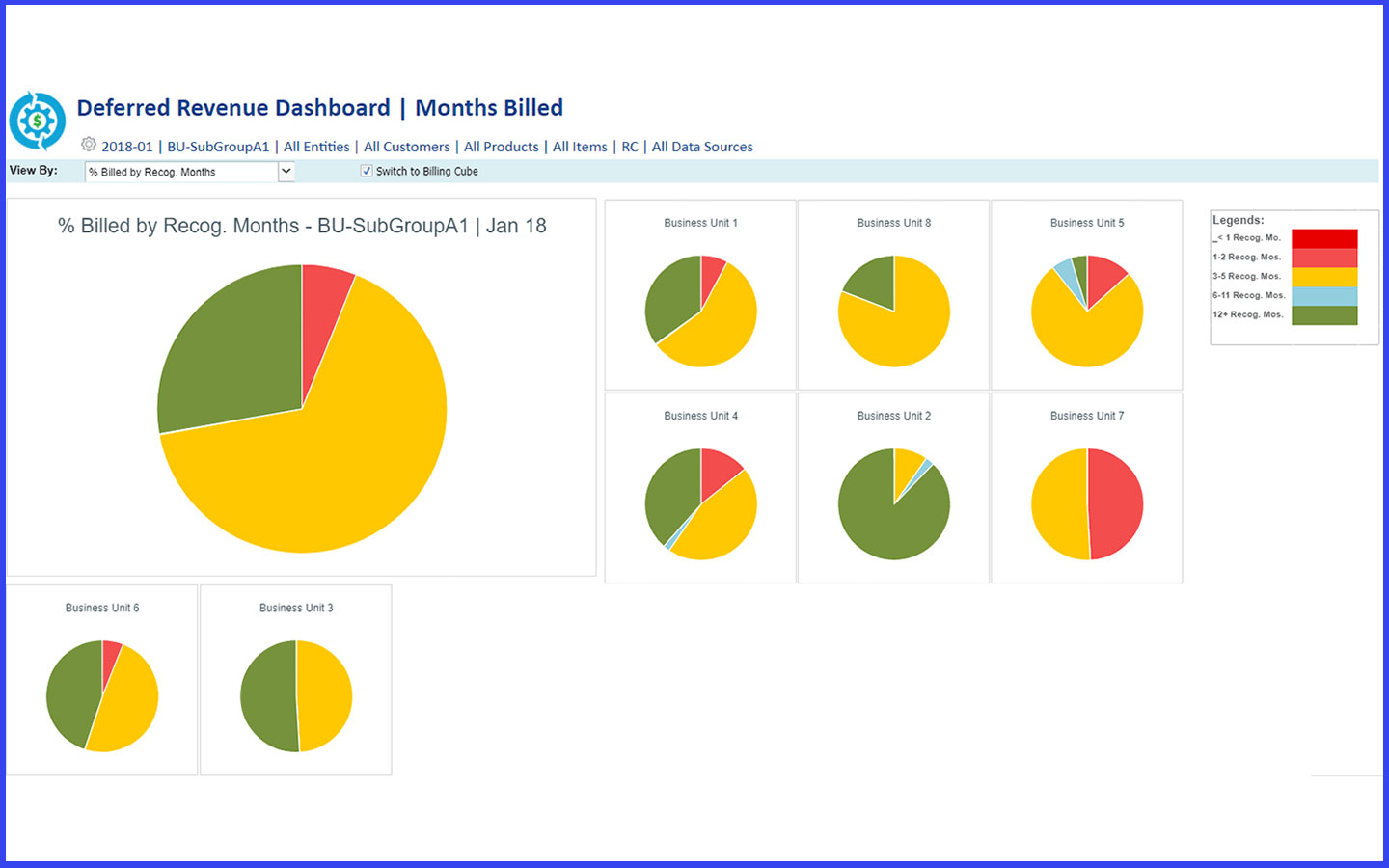 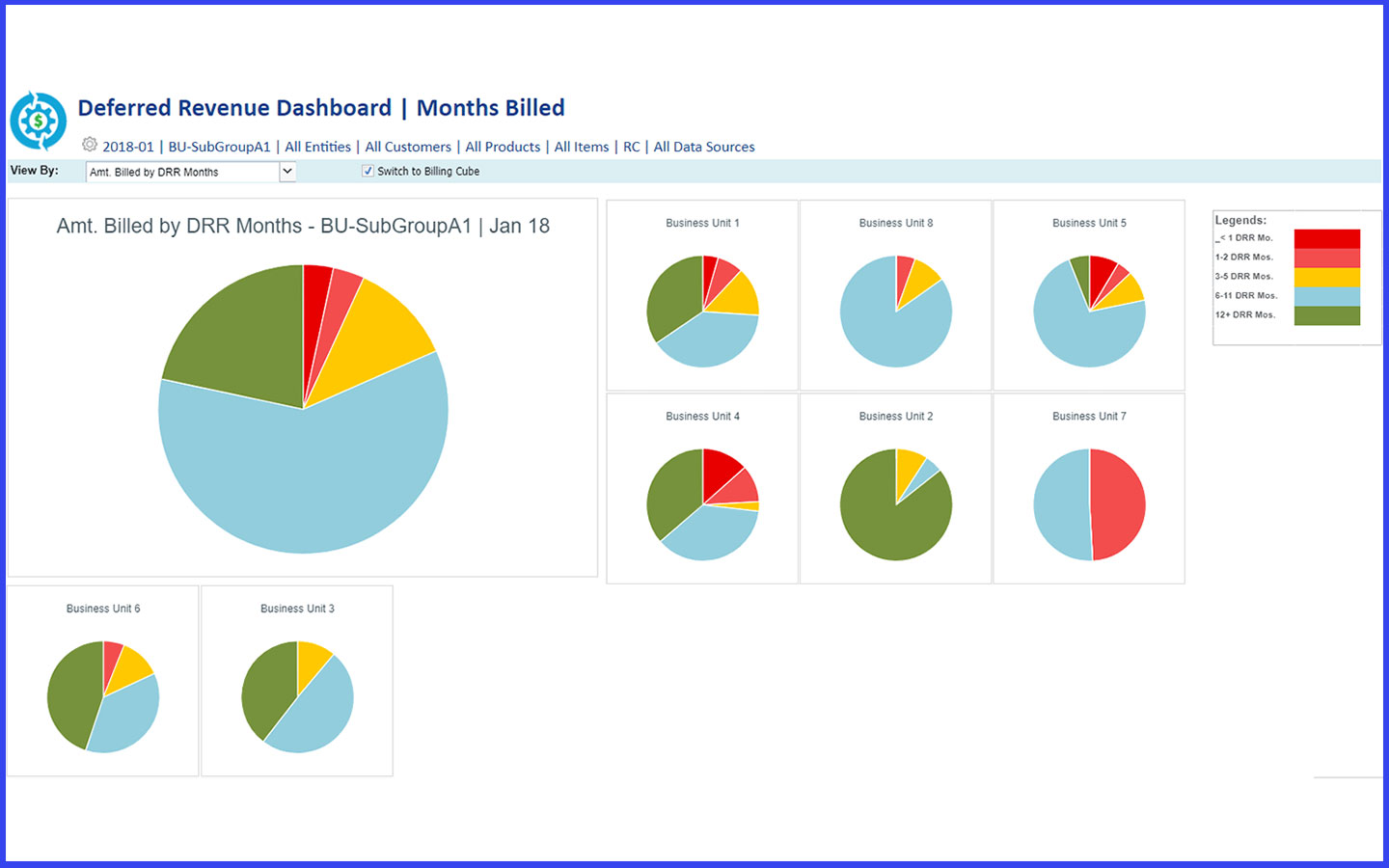 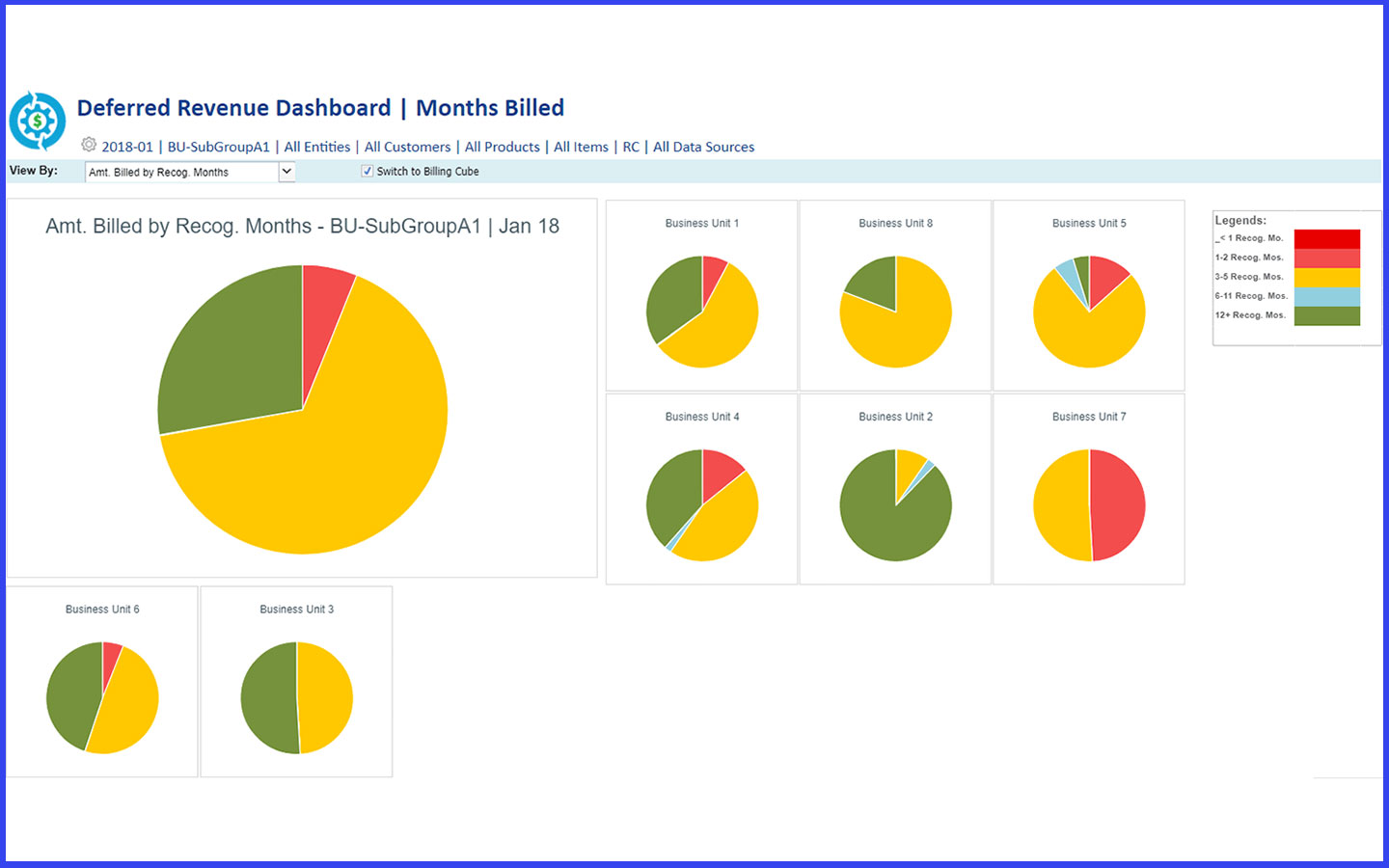 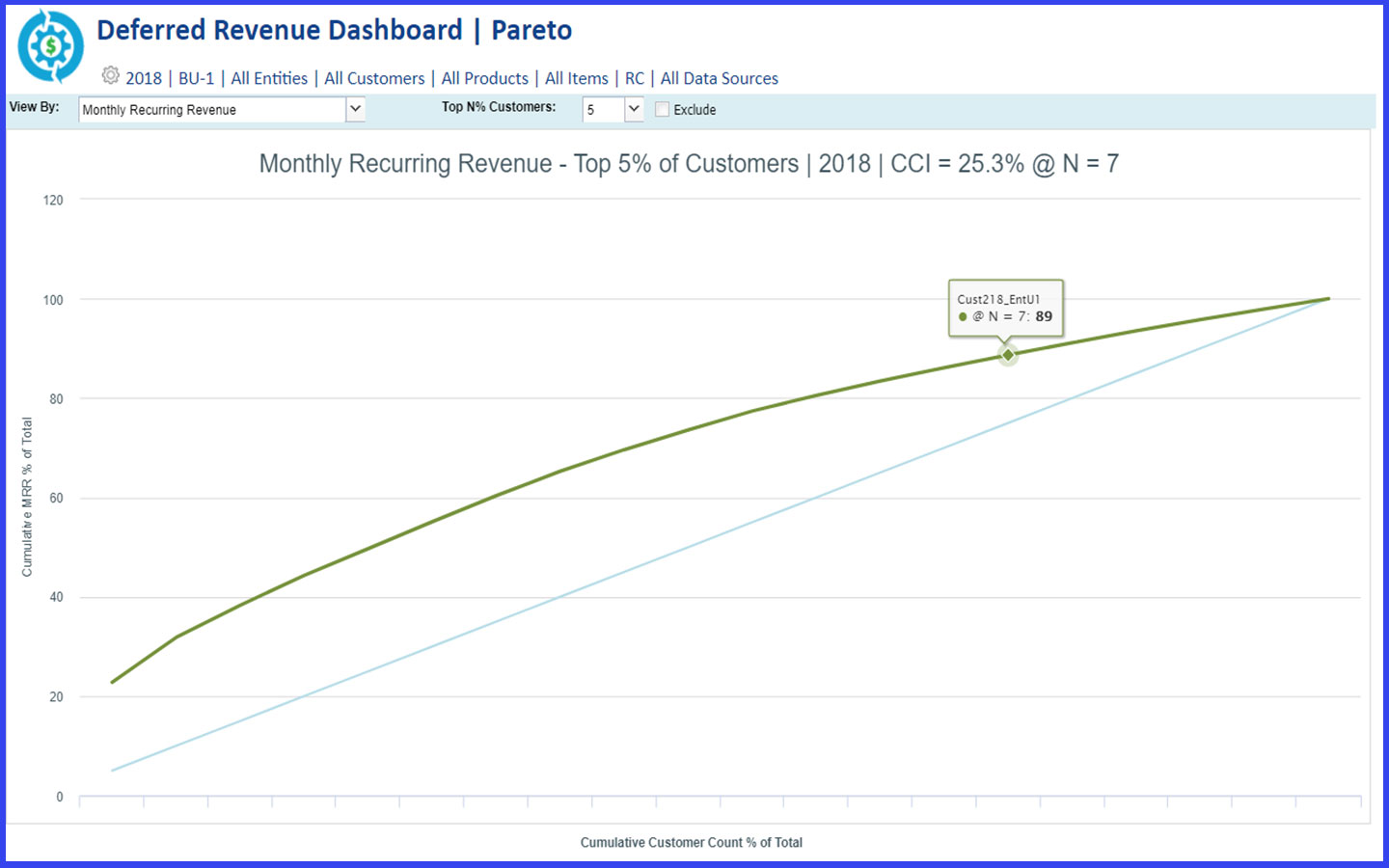 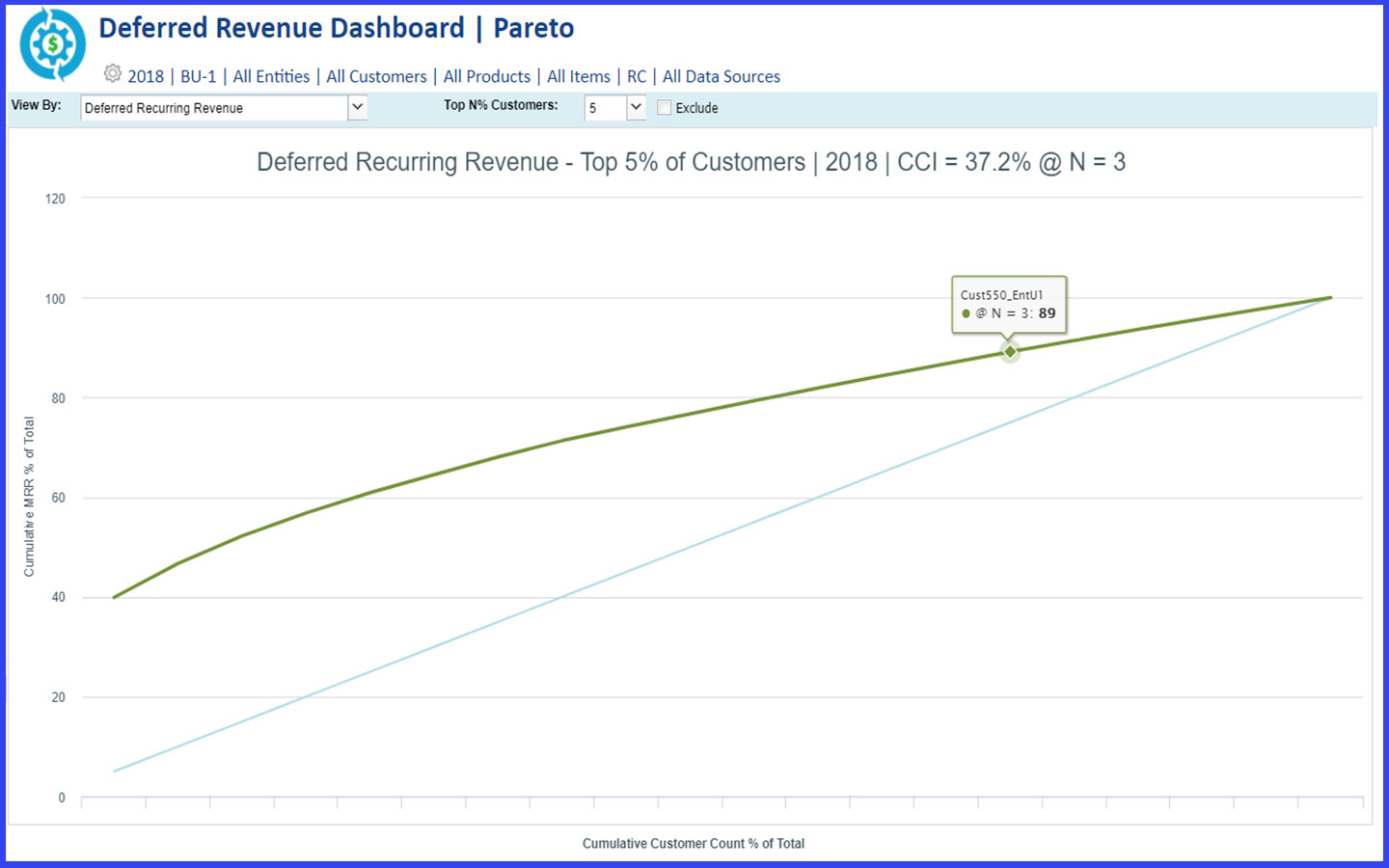 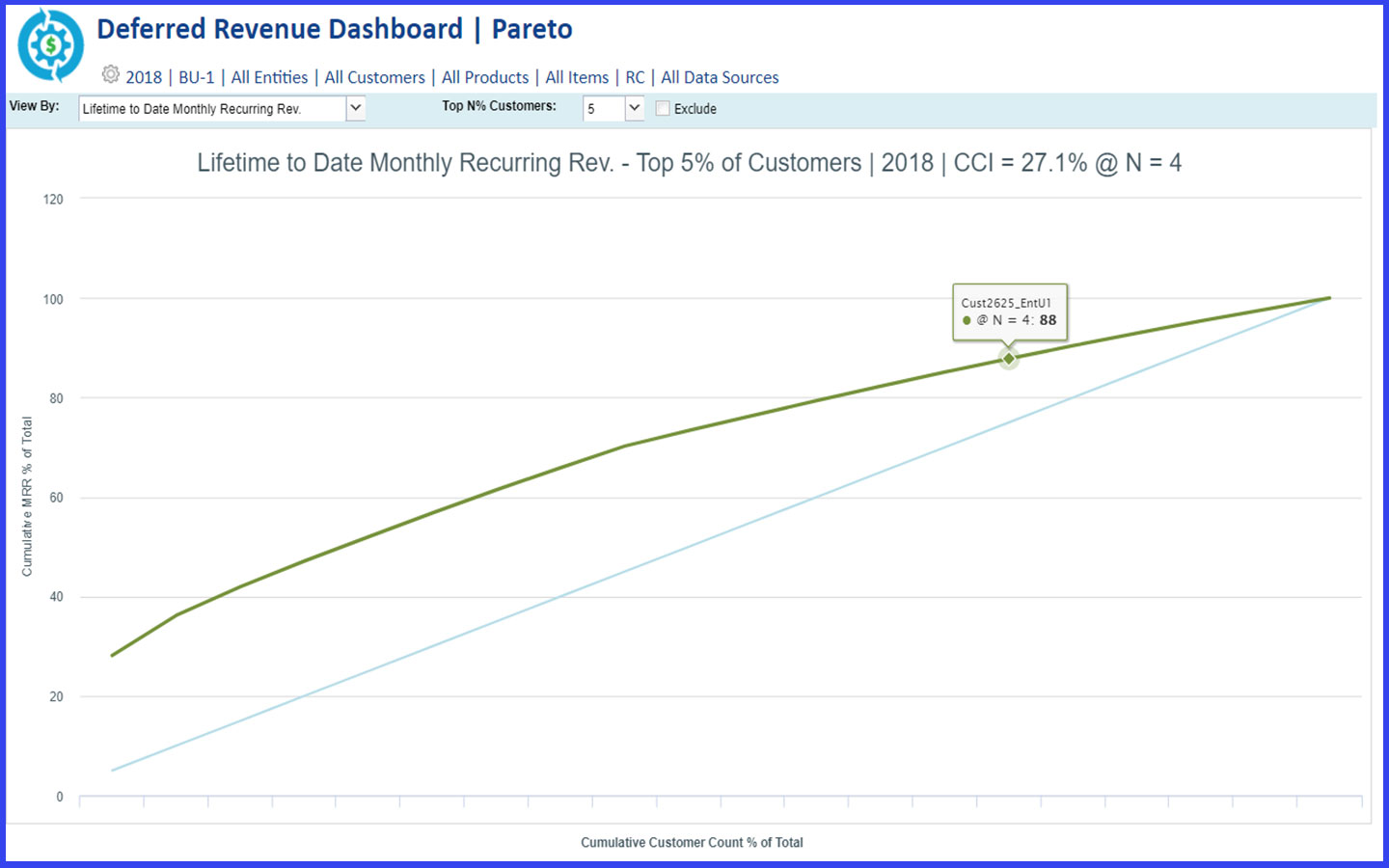 Compare Pareto graphs of revenue concentration or fragmentation to sister BUs within a chosen parent BU. Higher concentration equates to higher recurring revenue risk. Also compare sister BUs using a single index of revenue concentration, calculated as the maximum gap between the cumulative customer count % and the cumulative % of recurring revenue, when the selected revenue data is sorted in descending order. Visualize how the variation in revenue per incremental customer changes when looking at a user-defined number of top customers (up to 1,000) across all sister BU customer bases. 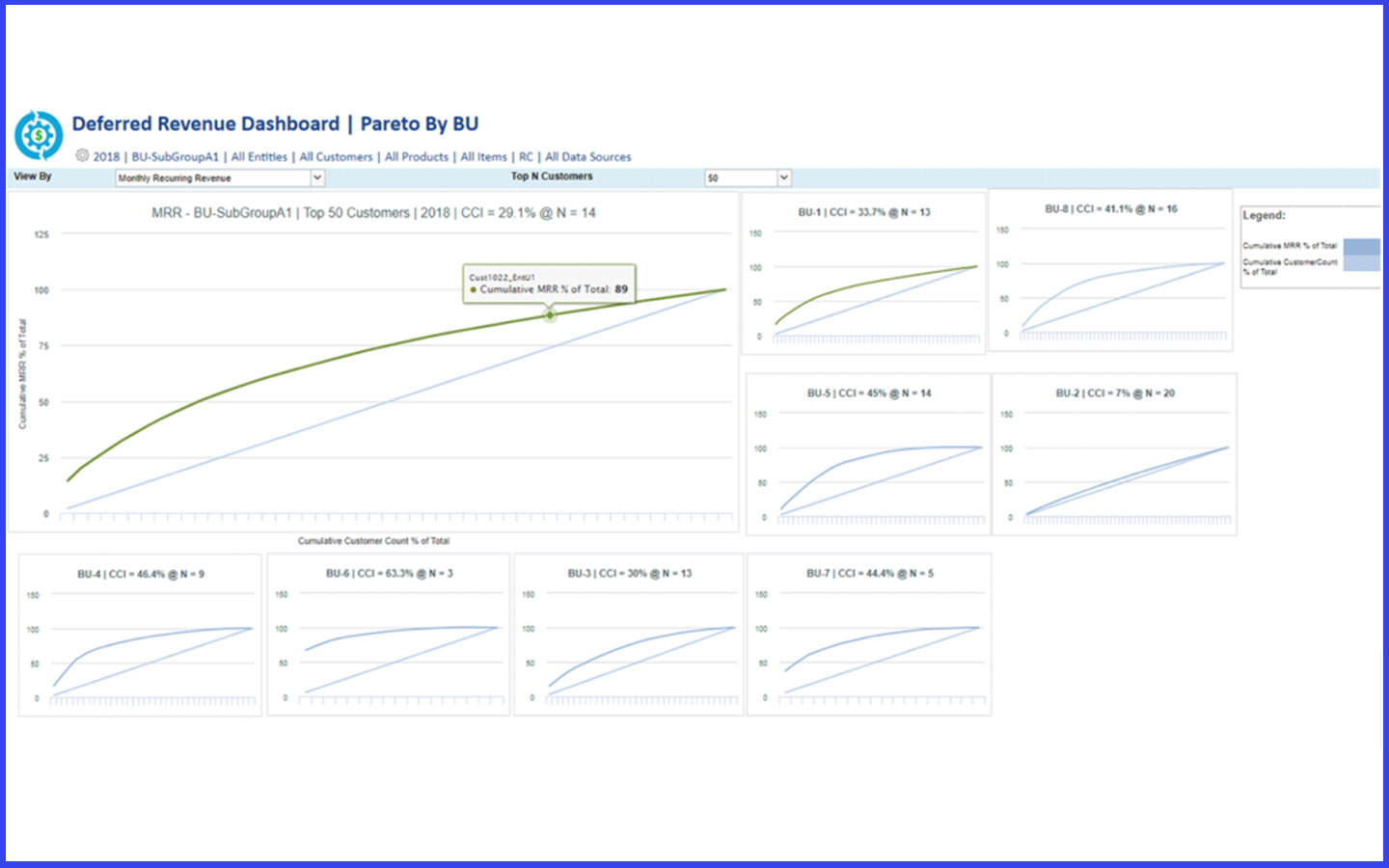 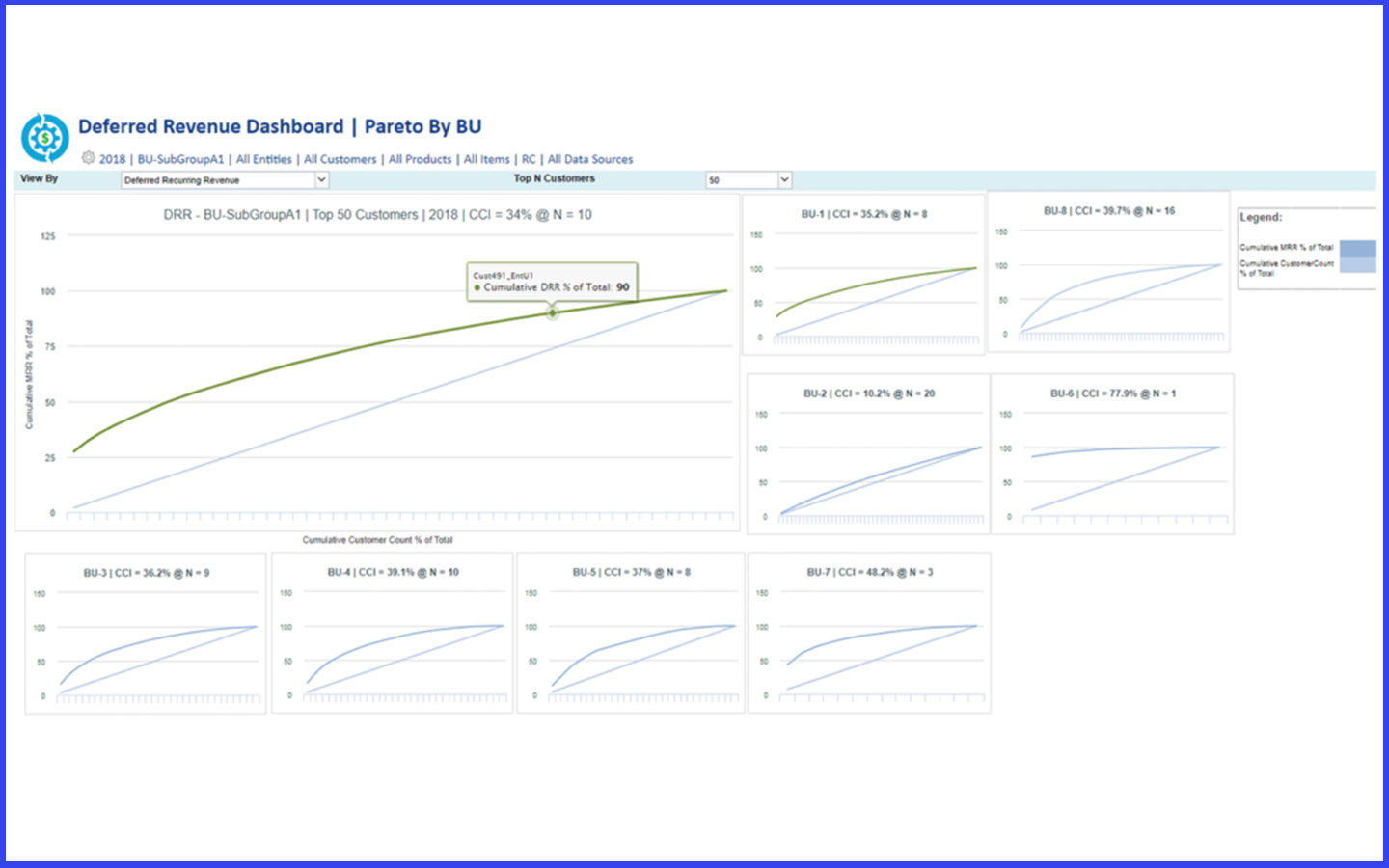 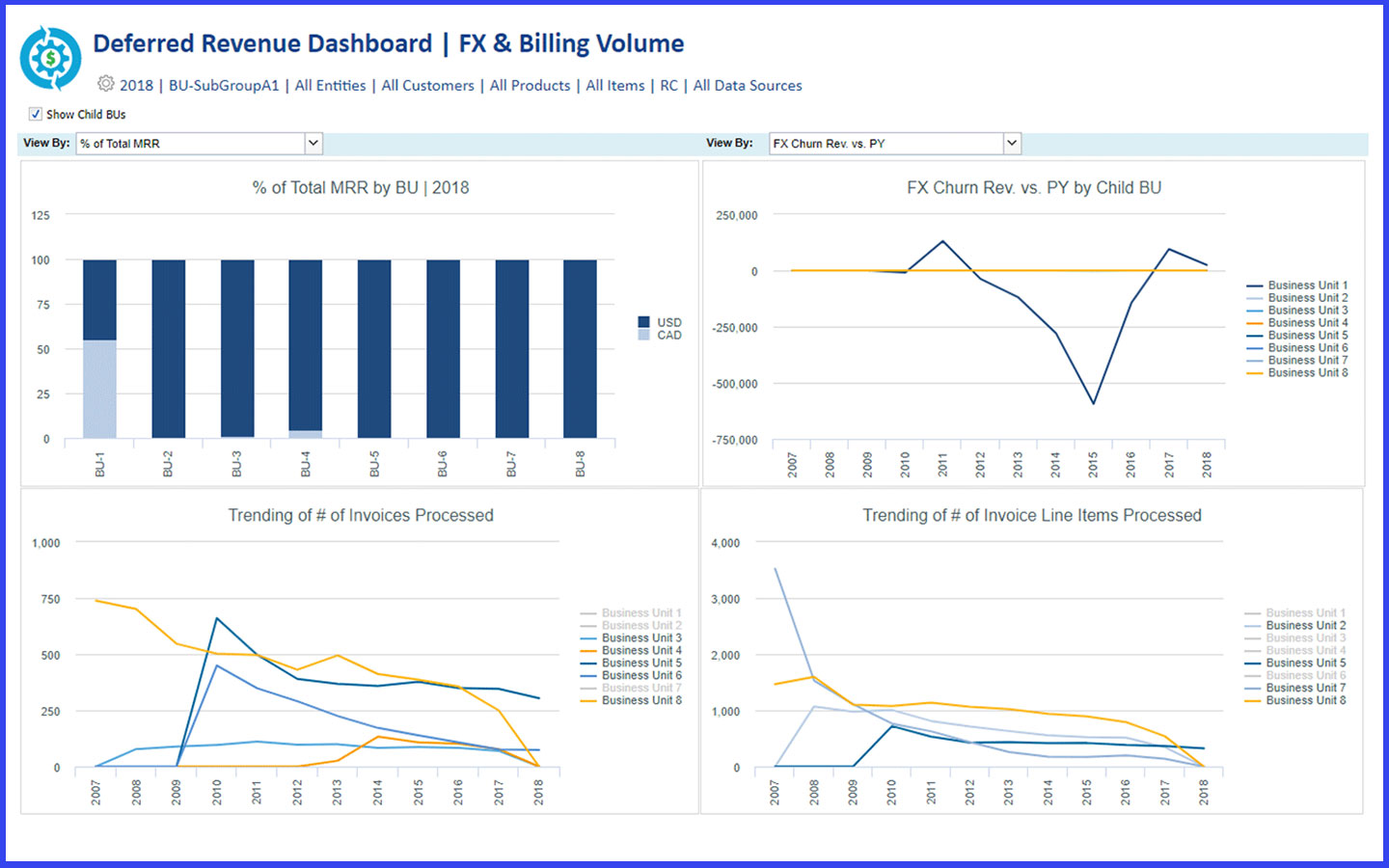 Quickly visualize what % or amount of revenue is derived from each billing currency in the selected BU or legal entity. Quantify and trend the level of FX gains or losses impacting churn, both year-over-year and month-over-month to assess future FX risk and historical FX impacts. Monitor billing staff productivity and plan for the appropriate levels of billing and collection staff by analyzing the trending of the number of invoices processed or the number of line items billed across months, quarters or years.

As a valuable management oversight and internal control, quickly identify anomalous fluctuations in invoice timing vs. the recognition start dates via the trending of unbilled MRR and retro. MRR, which will go up as the number or % of invoices that are billed late increases. Similarly, for the balance sheet side, identify other anomalous fluctuations in invoice timing via the trending of unbilled AR and future AR, which show the cumulative total MRR that has been billed late or billed early, respectively, vs. the recognition start dates. Finally, drill down to the top invoices that have been billed late or billed early in the selected period for review and follow-up, including for performance feedback and retraining of billing staff. 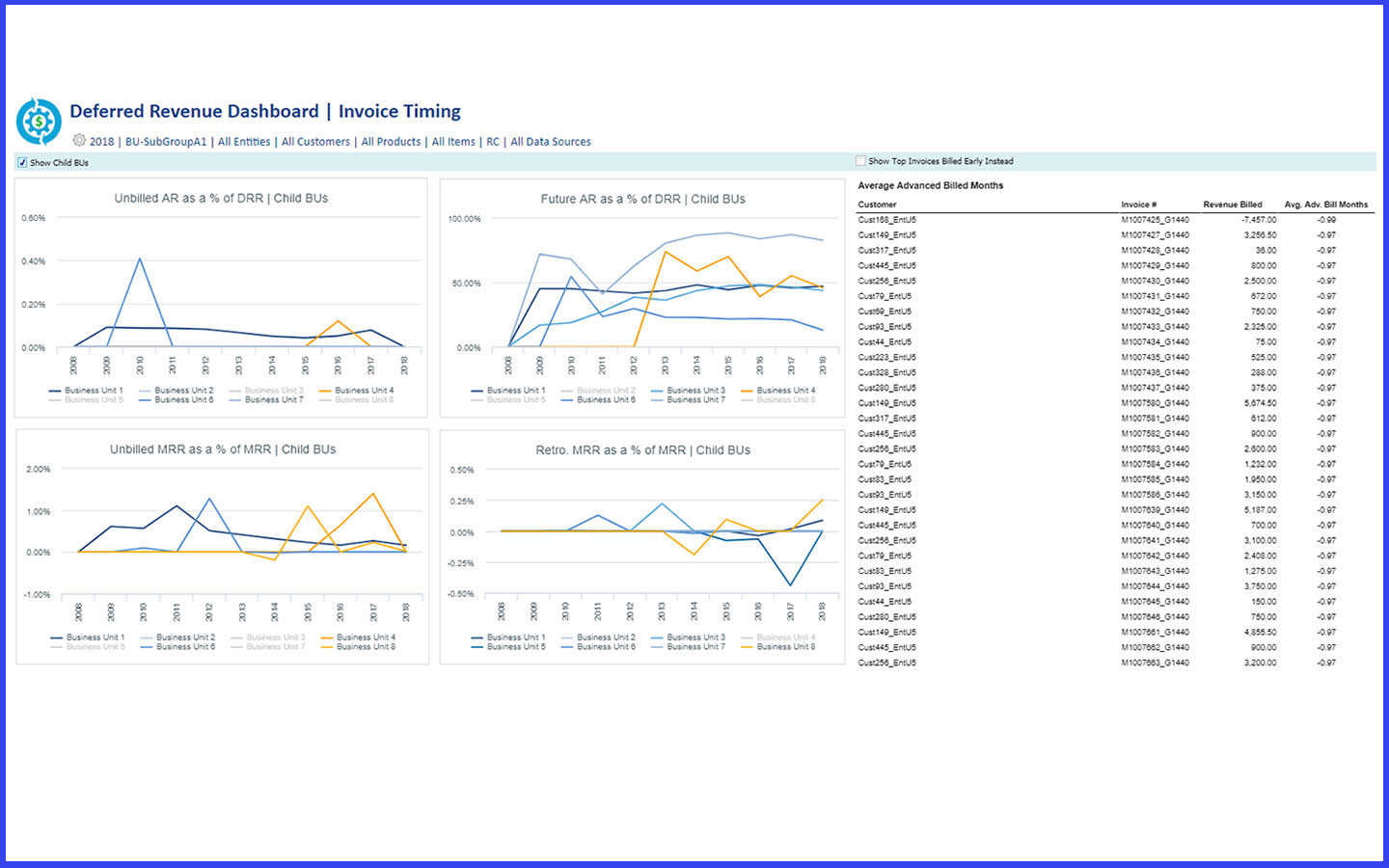 Ready to get started?
It’s easy.

Let’s have a talk

We’d love to hear what you are looking for. Drop us note here and we’ll get back to you in 24 hours.

Ready to get started ?